So, today we aim to clear the dust on the existence of long haired Pugs. The term sounds interesting, but is it more of a fantasy than reality?

If hunting the truth about long haired Pugs excites you, read on.

Ever saw a flying fish, a golden tiger, or an unusual-shaped egg?

The world is choked full of such mysterious things. But, unfortunately, some of these are rare in occurrences, and others are rare in time.

Humans are somehow obsessed with rarity. We want something that we can’t have.

It applies nearly to everything in the world. Even to Pugs!

Dogs have always been an inspirational companion for us – human beings.

Remember the awe-inspiring dog characters in many novels, movies, and cartoons? Buck from the call of the wild? Scooby doo? And Spike from Tom and Jerry?

These characters were NO super dogs but were distinct beings. We loved the uniqueness in them.

The same goes for the Pugs. You see a long haired Pug and think, wow – that’s a cool dog! It’s cute, it’s fluffy, and it’s just kind of awesome.

But the REAL question is, do they exist anywhere on the planet or are only a fictitious being?

Origin of the Pug Dogs at a Glance

Their origin dates back to 700 BC. At those times, Pugs were bred to be part of the ROYAL Chinese families.

They were flat-faced and short-haired dogs, very similar to the Pugs we know today.

Their only role was to be the best buddies. If you also own a Pug baby, you’ll second that! They could be nothing else but fantastic friends, right?

Lo-Chiang-Sze got shortened to Lo-Chiang. This was later reduced to Lo-Sze – a sassier, more intelligent, and more straightforward name!

Since then, the popularity of the breed has never decreased. Many thought them of special canines. They would only enjoy appearances in royal ceremonies.

In 1688, the breed managed to earn the prestige of being the official canine of the Dutch Royalty.

But that was not the end.

In 1796, the great Napoleon and his wife also possessed the excellent companion breed.

The breed made its way to the US sometime after the Civil War happened. 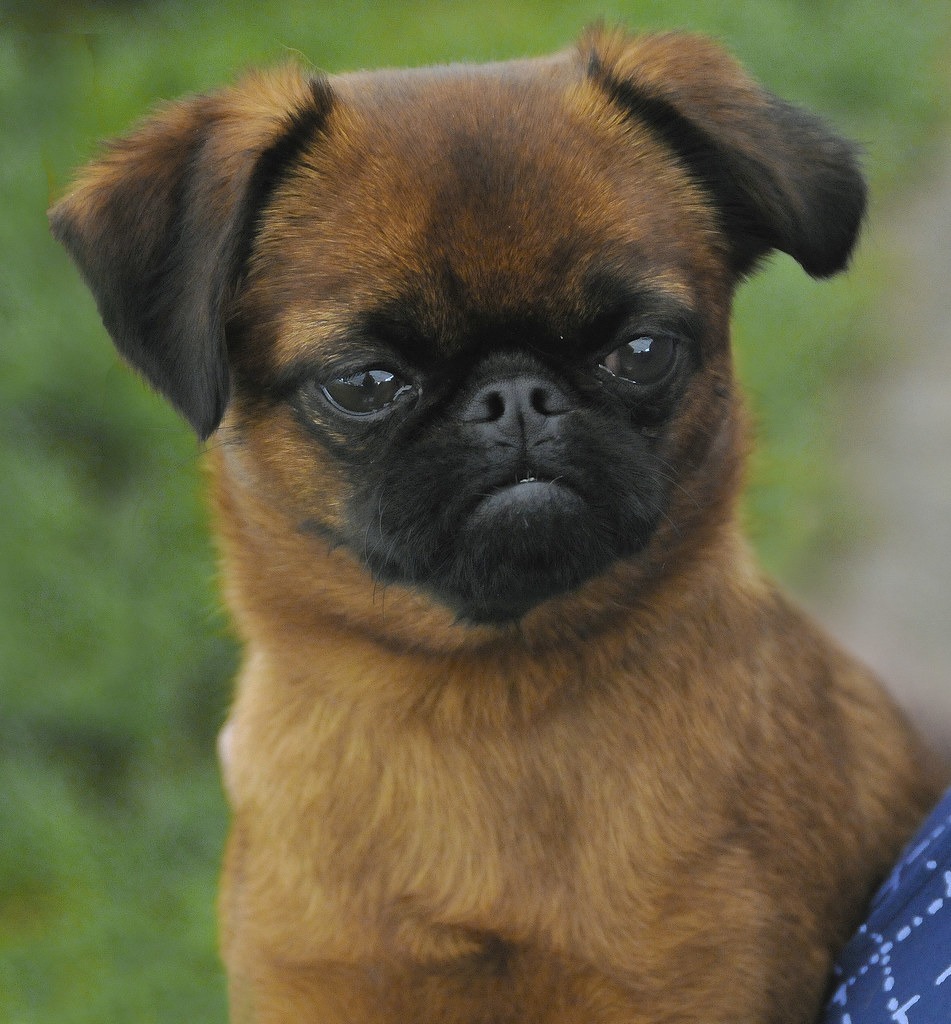 Admittedly, the Pugs are short-haired doggies.

However, there is a debate about the presence of long haired Pug variations around the 1800s. There have been floating rumors and myths from then to this day, but no solid visual evidence to prove.

Also, there are no photographs to back up the claims. Not a single one.

During all that time, there were no long haired Pug dogs found.

The only thing that has persisted is the HUGE talk about some long furred Pugs.

Although they were not purebreds, as they claim, the long haired Pugs HAVE existed. Maybe they still exist – who knows!

Urban legends strongly assert there are long haired Pugs. Therefore, there must be some traces to solve the puzzle.

Dog fanciers draw some conclusions based on some physical factors, some genetic mutations, or flaws. But, if you can call it so, it might have resulted in bringing the long haired Pug puppy into the world.

Genetic modification has burst the fantasy bubble and brought the long haired Pugs into the world of reality.

What are Long Haired Pugs?

Fluffy from the outside but Pugs from inside. The long haired Pugs take birth when a Pug is bred with some other breeds that feature long coats. Like, Pomeranians.

They have comparatively longer hair than the normal Pug doggies. They are cute, but their Pug-ness is somehow compromised no matter how Pug-like they look.

Despite their rarity, another thing that might be the reason for their hype is that they are way less prone to health disorders. This primarily is due to the fact they are not purebreds.

However, they are not fully disease-proof. Therefore, they may still be carriers.

Long haired Pugs looks no different than purebred Pugs, but one with long and fluffy hair.

Square and stocky inbuilt and flat-faced with overloaded comical and loveable expressions. Pugs have big round eyes, short legs, and distinct wrinkles on their face. All that and prominent personalities!

No doubt, Pugs are clowns and attention-getters.

Yes, you guessed that right! There is also a possibility that your so-called long haired Pugs have a few physical traits that you might misunderstand.

They can be illusionary factors contributing to showing longer hair.

But what are those deceptive characteristics? You may wonder.

Keep reading to know more about the misleading physical characteristics found in some Pug dogs.

One of such features can be a Pug with a long tail or, in some cases, a long uncurled tail.

Some dogs can have relatively long hair on their tails than the rest of their bodies. 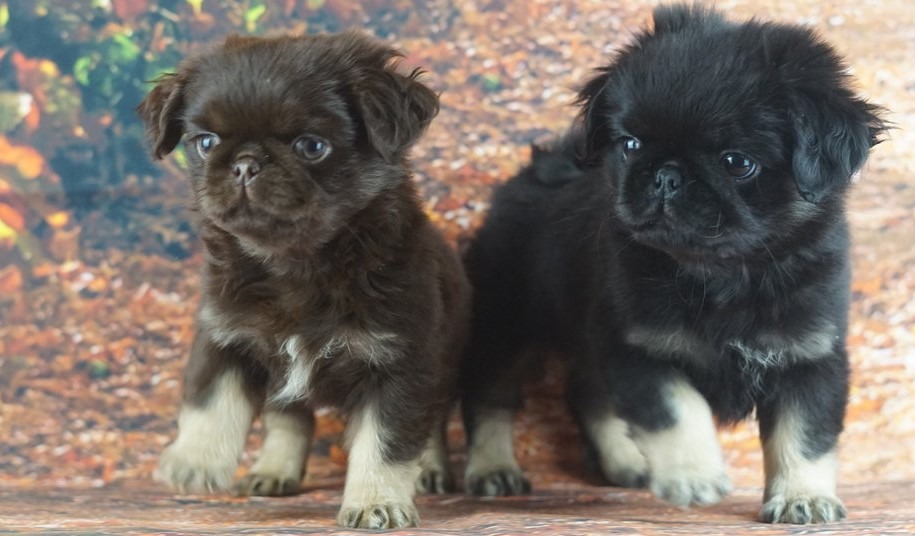 The second most deceiving thing can be fur thickness.

Like many other dog breeds, Pugs can have two layers of their fur; an overcoat and an undercoat. Both coats are short and thick, but the density varies. However, black Pugs are an exception. Almost 80% of the pure black Pugs have a single coat.

Those who have a thicker topcoat might sometimes get misunderstood for having long hair. But, believe me, with the amount of Pug hair I clean up in my house, it seems I have a dozen long haired Pugs!

It probably appears longer than average but is still short by all definitions.

Another factor that can lead you to misinterpret a Pug dog as long haired fluffy can be crossbred. You may take a dog – half Pug and half Pomeranian – as a long haired Pug. That’s nothing but the game of mutation.

If you are more than 100% sure that the Pug dog, you assume as a long haired Pug, has not come from mixed breeding. Still, the genetic mutation can be the culprit behind the newborn’s long hairy coat.

Well, in that situation, there is a possibility that one of the ancestors of your fluffy puppy was a mix – with a long coat. Hence, the parent dogs of the long haired Pug puppy may have had that long hair gene hidden with them for generations. Then it was passed it on to your Pug puppy.

Sounds like a long shot? But that’s somehow possible.

A careful breeding plan can result in physical traits that might not pass on for generations. This can also result in a dog that is mostly-Pug but with longer hair.

Crossbreeding Any Other Dog Breed with Pugs – Can it Cause a Pug to Have a Long Coat?

When a mixed puppy is born, it holds traits from its parents, for sure.

However, it also holds some physical traits from its ancestors in line. Commonly five generations back or maybe more than that!

Therefore, if we breed two Pugs and the produced litter has a puppy with longer hair. That would be a rare occurrence. And they can take it as the most sought-after long haired Pug.

But the truth is different.

There are strong chances that any of the ancestors of the Pug’s bloodline may not be purebred. Some doggie had a long coat.

Purebred Pugs, those with short hair, are double-coated. Pugs are brachycephalic. They need help to maintain their body temperatures in extreme weather.

Contrarily, the rare long haired Pugs can better withstand colder temperatures. Thanks to their hairy coats!

Also, the longevity of their coats makes shedding a bit less.

However, the denser and longer coat makes them vulnerable in hot and humid weather.

So, there is some maintenance stuff you can use to groom them. For instance: 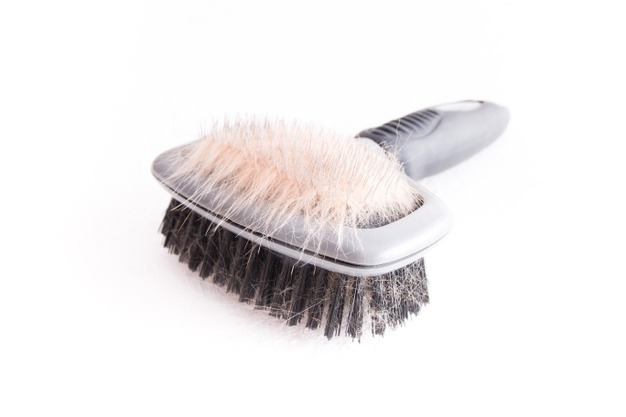 Though they may not require much care, they definitely demand some of your time – as any other dog breed will.

There you have it, everything worth knowing about long haired Pugs. Not a myth, not a fantasy, but an outcome of some genetic modification.

However, a Pug is always a Pug. No matter, its coat is long or short, the cutesy creature is ready to pour its warm love on you.

Though they are scarce beings, if you get a chance to get one, don’t get into the reality or fantasy debate. Just seal the deal.

All you should focus on is they are extra pretty, and that’s what matters.

Either they are real or fictitious, no need to give a darn.

Celebrate their rarity, and have oodles of fun!

You may see some of them NOW, who knows!